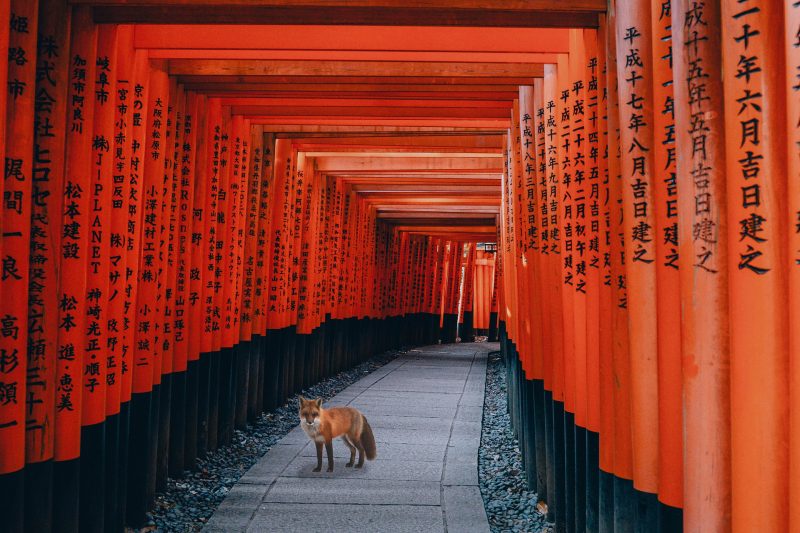 While I landed on the path of Torii as the base image pretty quickly; I vacillated on which animal to insert into the image. Originally I started working on the Siamese cat, after some thought, I determined there would be a lack of interesting contrast between a grey almost white cat placed on a grey cement walkway. I finally settled on the Fox as my Subject to insert into the background and got to work.

I found the Select Subject tool followed up by using the “Subtract from Selection” quick selection tool to clean up extraneous data that gets sucked into the subject selection due to neighboring parts of the background matching the colors and brightness of the subject. After the area surrounding the subject was cleaned up I changed to “Add to Selection” tool to pull in the fur from the edges that were not highlighted by the “Select Subject” tool. I toggled between “black and white” and “Onion Skin” View mode to clearly visualize the extremities of the fur I was pulling into the selection via the tool. I made sure not to pull any more selection than needed so I didn’t pull any more of the background image than necessary.

I struggled to apply what I felt was a realistic shadow for the fox in the image as a true light source and direction was somewhat finicky to ascertain. I opted to err on the side of caution by keeping the shadow very light and leaning away from the majority of the brighter pixels in the background.

After I completed the project I noticed a subtle box shape around the Fox. It appeared to be the outer rim of the background from the fox image. If I played with the settings on the layer I found that the background of the original image was stored in the layer and parts if it were showing up as a subtle box around the fox. I discovered the click and dragging of the layer from the original image to the background was the source of the issue. At this point, I started over and worked on a different method of importing the fox that didn’t generate unwanted artifacts. I ended up working through the same steps and rather than drag the layer into the new image I used copy and paste to bring the selected area into the image as a new layer. This brought ONLY the fox into the background. This produced the desired effect of bringing the fox into the background without the artifacts. From there I retraced my steps by adjusting the lighting with a combination of curves, dodge and burn effects along with adding the shadow.

The finished product clearly excels beyond previous works I’ve created. All due to the additional tools such as Subject selection and using curves and dodge and burn to adjust lighting discrepancies.