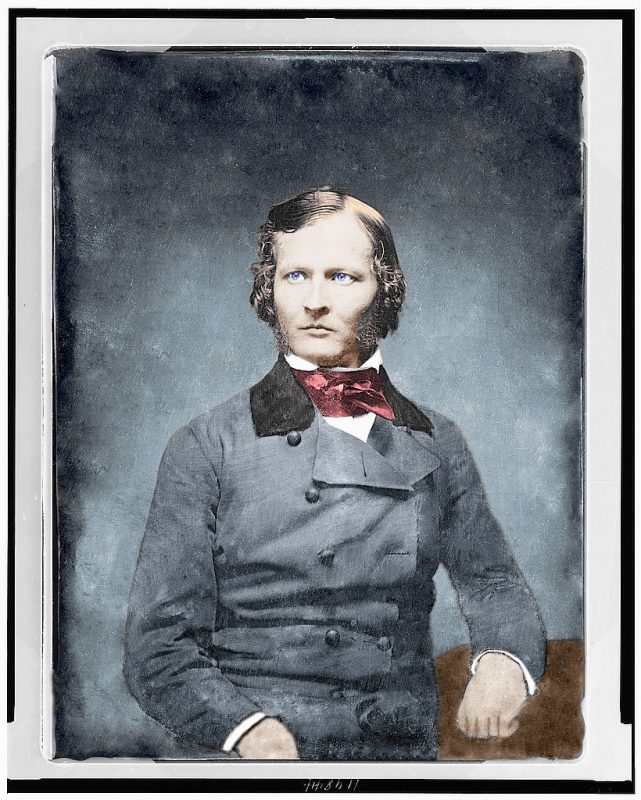 The repair was time-consuming. I would easily get sidetracked by every little imperfection. I spent a fair amount of time “firming” up borders to make sure there was a clear delineation between the background and an arm or shoulder without overcompensating and making the border look artificial.

I discovered issues using the patch tool which created blooms when the target area had bright points caused by film damage. This led to me spending a fair amount of time modifying the area I was importing textures into to make sure the average levels stayed constant and blooms did not occur as the patch tool tried to modify the incoming textures to match the average brightness of the target area.

The PiXimperfect Youtube tutorial Rob shared at (https://www.youtube.com/watch?v=k5Y8YcKnRm0) was a huge windfall and made developing realistic palettes and applying color to sections easy and expeditious. With a minor amount of exploration, I was able to produce multiple gradient maps for every major element of the photograph I felt should have color applied to it.

reconstruction of the left hand was troublesome as there was not enough information to accurately represent its shape and position. Not having a good foundation in portrait design and construction left the hand in what I would consider a reasonable but unimpressive state. Hands down the worst part of the repair of the portrait.

I vacillated about whether to include what I believed was a small couch he was leaning up against. It was the only way I could explain his body posture and the dark hue that was persistent in the lower right-hand side. I wasn’t completely pleased with the way colors took to it as it was so dark most colors did not highlight its existence at all let alone differentiate it from the background. I finally settled on building a gradient map from a suede couch and found that seemed to show up the best. Combined with the less than spectacular left hand I feel the bottom right side of the portrait is the least impressive.   One option might have been to eliminate the excessively damaged portions at the bottom of the photograph rather than attempt to reconstruct what you could not see or estimate but I suspect it would have made the portate feel off if a lower section of it was removed or blanked out.

Jacket design and approximate time period influenced the choice of color I used. A combination of film and portrait backgrounds from that era tended to create a dark or dark blue hue which made the differentiation between the jacket and background troublesome. Separating color applications between both groups and adjusting levels between the two until repairs I performed to borders of the jacket became more obvious created an end product that while similar looking had an obvious distinction of textures

I honestly was surprised how well the eye’s turned out. I made an incredibly simple gradient map without a reference palette and it seemed to turn out better than expected.

Overall I learned about multiple new tools and techniques that I haven’t used before.   In some cases, I was surprised by how effective they were and how easily I was able to integrate them into my normal workflow.