This week was a lot of fun! My maternal grandmother was a professional photographer and colorist and I grew up seeing her transform photographs, so I was really excited to try my hand at it, albeit digitally.

I started out with the portrait photo: 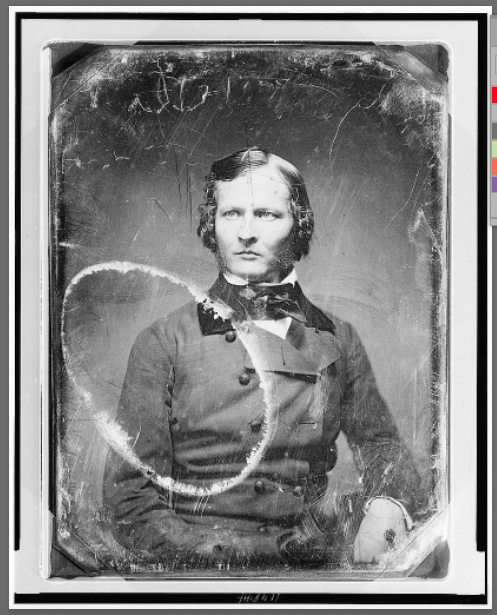 This image has a lot of wear and tear and it was a lot of fun to play with. I did my restorations entirely with the clone stamp tool. I played around with the smudging tool initially, but I could always tell where I had made alterations due to the smoothness of the areas. I sampled many different areas and went over them multiple times, sometimes with varying levels of opacity, until I felt I got it right. Here’s where things ended up after I was done with the restoration: 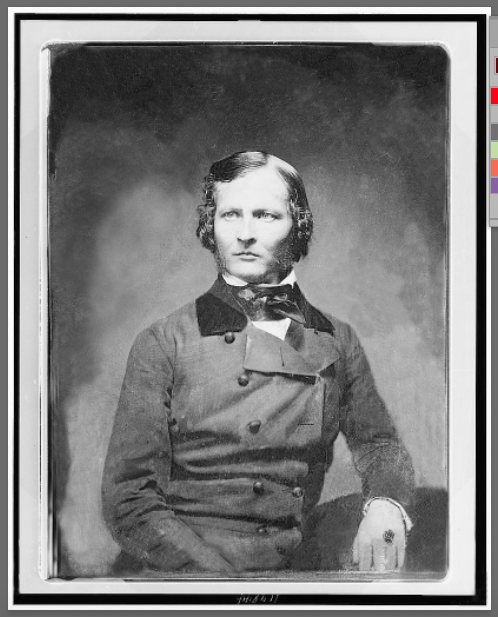 I’m pretty pleased with the result, though I’m not entirely happy with his hand or leg since they look a little too painted to me. Still, considering that I had to build about 50% of them myself, it could be worse.

Now time for color! I was concerned about making an error in my coloring and not being able to isolate it/back up, so I worked my colors in a couple different layers. Here’s the first layer of his coat. It includes multiple colors/tones of blues to try to catch the variety of colors that occur in real life: 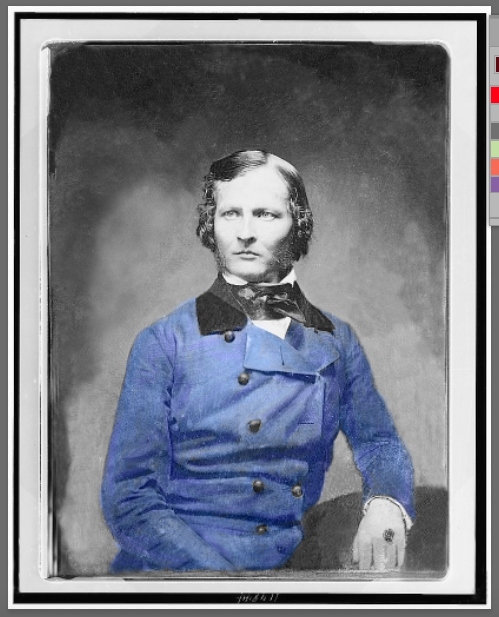 Next I duplicated the layer and added some purple details (in case I hated it). I’d already decided to paint the backdrop red, so I wanted to add a little reflection on his garments. 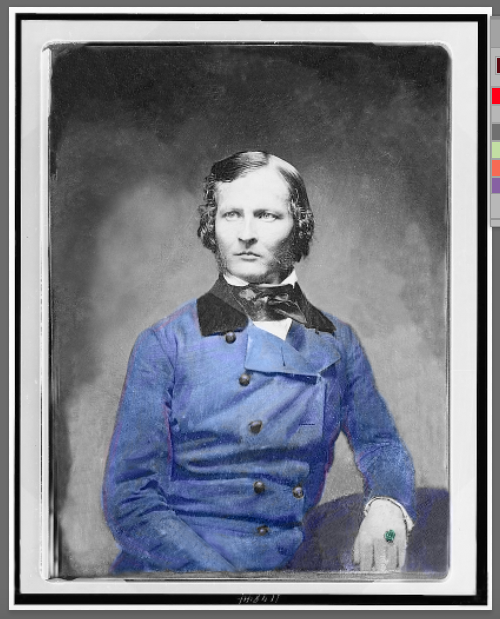 Initially, I’d planned to do each color/area of the photo as layer masks so I’d have a little more freedom to let loose and not worry about coloring outside the lines. This was the case with the backdrop layer, so I used the paint bucket to color the background in two tones of red: one brighter red and one deep cranberry layered over in the shadowy parts: 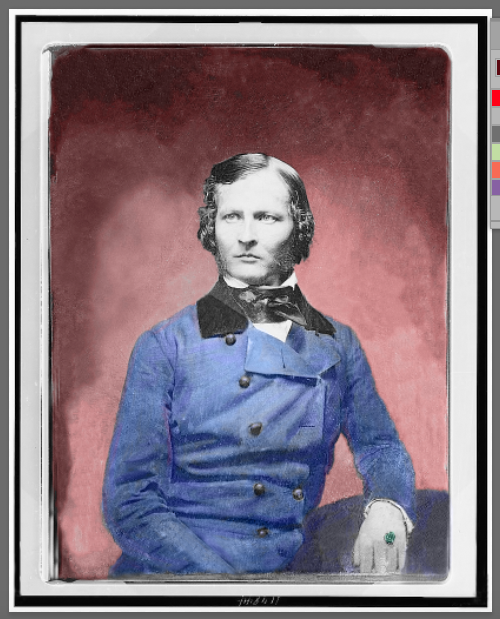 Here’s what that layer looks like without the man inside it/any of the above layers behind it: 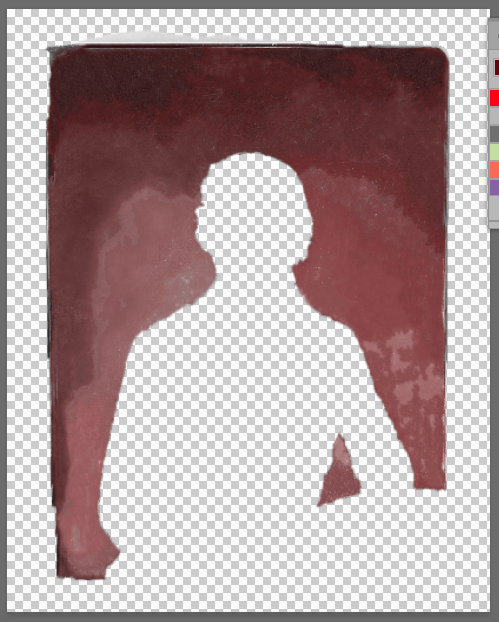 Finally, I painted in his face and hands. I also did this using layer masks which I gradually expanded to where I was working. First, I did his skin (with many, MANY colors) and masked out his eyes/hair, then I unmasked his eyes and colored them, then his hair, and finally his cravat and collar. Ta-dah! 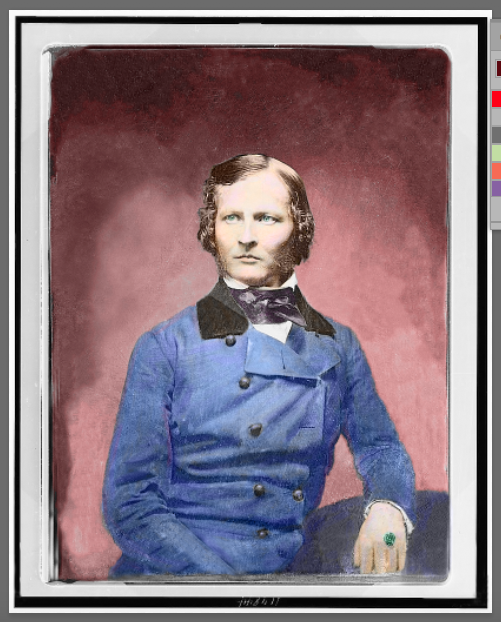 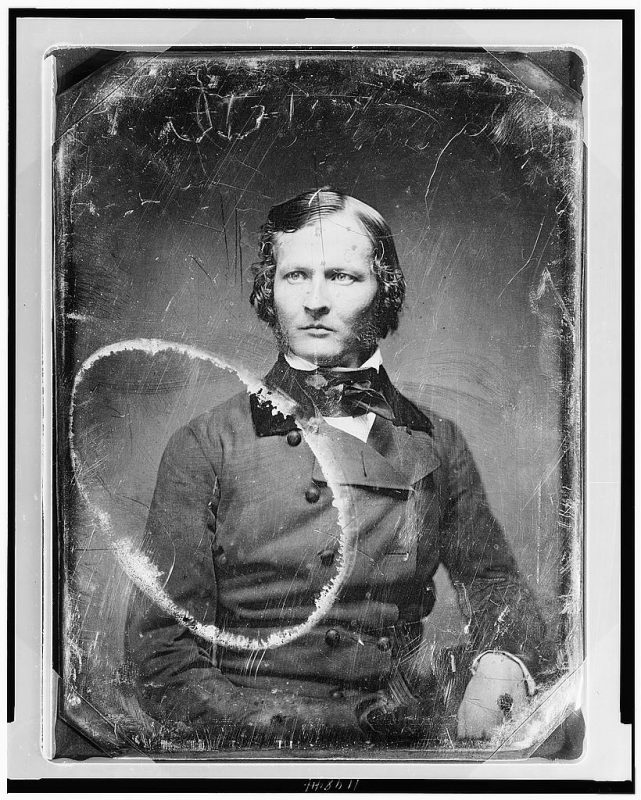 And here’s the finished work: 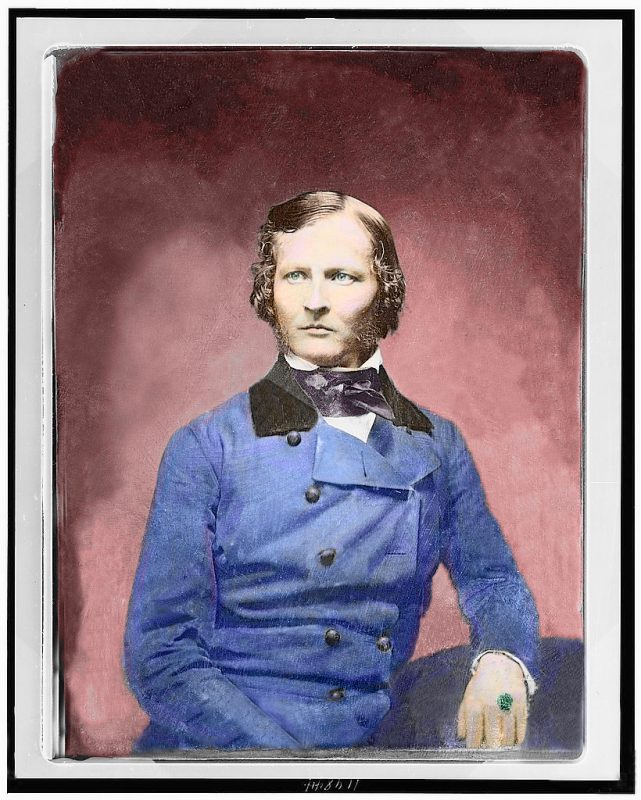 This was an adventure and I had a blast, but I recognize that there’s still a lot that could be improved. The colorization looks more like tinting than true coloring of the photograph, but I’m still pretty pleased for a first attempt. I struggled a little bit learning how to use my tablet and figuring out how to achieve the looks that I wanted. I’m still not 100% sure I know what I’m doing, but I’m sure I’ll get the hang of it in the weeks to come.

I discovered a bug in Photoshop and got an important reminder to save my work often during this project. Whenever I tried to save a new color to my palette, Photoshop would freeze and I’d have to do a hard restart on my computer in order to get it working again. After some quick googling, I discovered that I’m not the only one who has had this issue. The benefit of this glitch is that it got me to mess around with my tool options until I figured out how to add my color palette/swatches to my visible tools. It was simple and I’m ashamed of how long it took me to figure out that it was under the Window header all along.